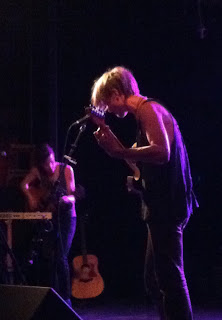 
Way back in 2009, Ryan Gustafson released the glorious and highly-praised country rock Donkey LP that had listeners (at least this one) begging for a follow-up. But for a while, as Gustafson dabbled with the Drughorse Collective and numerous other local bands, the release of his next record was left up in the air.
However, after nearly four years, the wait is over. This time, Gustafson hasn’t completely returned by himself, but instead as a reincarnation he calls The Dead Tongues. Even as an expanded group, things are still part grit, part guitar picking and completely infectious, but there is a more polished and mature presence. Gustafson and company may be a little more weathered after a few years, but on Desert they’re certainly no worse for wear.
Desert finds us at the optimistic beginning of a journey that doesn’t necessarily have a destination in mind. On “Call To Me,” Gustafson’s signature subtle twang and the accompanying harmonies are robust, and like the morning sun, the country rock-laden guitar shines brighter with each strum. The aptly named song “No Intentions” follows, offering the same musical rewards that reflect the energetic kickstart to the album.
Then, like a parched and tired traveler, the album’s title track sways and staggers onto the scene, but gracefully, with stronger-than-ever guitar and percussion. While its lyrics induce a cloud of bittersweet nostalgia, the instrumentation builds to a triumphant crescendo, and the result couldn’t finer. And as the album continues along its course, it’s just one of the tracks that firmly moves into memory and into the soul, refusing to let go.
Continue along the journey, and stumble into the throwback bass of “Depression,” where casually nonchalant lyrics like, “Well I get into depression like you get into cars driving you home,” speak of those times when there’s no need to care. As Desert continues on, the mood slows a little more, weaving in some funkier and darker instrumentation on “Sleep Talking” and “Silver Dove.” It’s the perfect component that results in a most well-rounded trip.
If “too polished” was to be a problem, perhaps Desert is flawed in that sense. Yet there is a certain crispness that remains throughout the album that is hard to make stale. The Dead Tongues are anything but expired and although the journey might be winding, the desert is calling. Grab onto the things country rock dreams are made of and make sure to jump on this ride.