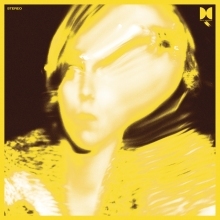 Here’s a rare full lengther that both starts and ends well. And the middle is damn nice, too. Starting with the snappy “Thank God for Sinners” it slams purposefully throughout, ending with a conclusive “There’s No Tomorrow”. Along the way this garage squallfest is varied and cohesive with tracks listenable, catchy and hooky. This prolific San Fran based stomper has already released several recordings this year but this one sounds less garage and more studio. On last years "Goodbye Bread" he roared about his exploding head. This time he wails that he doesn’t want to be a “Ghost”.

On “Twins” Ty dishes up basement guitar skronk, dishing riffs that can sound vocally like John  Lennon (“There is No Tomorrow”) while his guitar echoes a rough sounding George Harrison - Beatles with backbone, you might say. Along he way he references the Who (“Who Are You”), Blue Cheer, Led Zep and even Jefferson Airplane though probably aiming for a cross between Black Sabbath and Hawkwind. The “Love Fuzz” guitar riff could be a slo-mo takeoff of Eric Clapton’s “Sunshine of Your Love”.

This is guitar dominated heavy rock, so for those predicting its demise – look again. Cock rock still lives. Derivative? Yes, but with verve and style. Ty brings hooks and surprising rhythmic twists and turns along the way, so even if revivalist, it goes down well.

This is dense, chunky, primal, music with stomp, style and urgency. “Twins” is more sludgy and mid-tempo than earlier work but it’s solid, restless music for the young, loud and snotty.